The Luddites were an interesting bunch. Rioting and protesting in fear of machines taking their jobs in the textile industry which in the end, required the army to suppress. But what the Luddites dreaded eventually came true and technology today is replacing workers around the globe. Now, the automotive network is in a similar situation. On the back of reading a thread on PistonHeads, I’d like to discuss more when, than, if autonomous cars are going to form part of the driving network.

On enthusiast motoring sites, focus is on the driver’s car, occasionally snubbing lower-end models for those where engineers are allowed to show off their prowess. But, even these cars are susceptible to smidgens of new technology, take the Porsche 911 (991) GT3 RS as an example. The first of its kind to ditch the manual gearbox in favour of a 7-speed PDK. In turn, everyday cars are fitted with more and more sensors slowly removing the driver from driving situations, helping to keep the car in lane and keeping a safe distance between it and the lead car in motorway traffic.  I’ll be honest, I am all for these updates as it helps drop insurance premiums due to less incidents.

Tech showcase
Tesla, Google and Audi have showcased driverless technology over the past few years with the latter proving its autonomous capabilities by letting the RS7 tackle the Hockenheimring and chauffeuring celebrities to the red carpet. Tesla’s autopilot system combines laser cruise control, lane assist and a combination of sensors, radars and cameras to steer you safely to a parking space.

A parade lap on an empty race track is a little different to the school run where children may dart out at any instant. Who is to blame if and when there is an accident? Google’s own test car has had minor incidents at low speeds blaming other drivers over a six-year period racking up over a million miles. There has been one incident involving a bus where the Google car was to blame.

Programmed to kill
Before getting behind the wheel, a driver must study endless scenarios and rules. Drivers learn that larger vehicles (buses and lorries) are a lot less likely to give way and drivers in certain makes refrain from using indicators. It all comes with experience. An experienced driver will also manoeuvre a car to avoid hurting a passenger during a crash. But how can you teach that to a driverless car?

Are manufacturers programming cars to minimise the loss of life even it it means sacrificing the driver and passengers? Humans have an innate need to survive so a car that can potentially sacrifice the driver is one that may sway the buying decision. An MIT report states, “people are in favour of cars that sacrifice the occupant to save other lives — as long they don’t have to drive one themselves.” 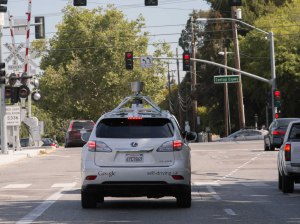 Volvo has joined Google by accepting full liability for accidents of their driverless cars in turn pushing the US government to set up consistent rules across states. In the US, it is illegal to jaywalk making it easier to test autonomous vehicles but here in the UK we aren’t as patient – we bolt across the street expecting the wrath of the angry driver if we leave it a little too late.

Currently, the UK allows for autonomous testing,  ‘providing a test driver is present and takes responsibility for the safe operation of the vehicle; and that the vehicle can be used compatibly with road traffic law.’

Summer 2017 will see the Government reviewing and amending domestic regulations to accommodate driverless tech but driverless lorries are being trialled on the M6 later this year.

When the autonomous car takes over from the driver’s car could it mean the road and highway code as we know it could disappear? And will the ethical thinking of the car play a major part in the buying process? These are questions I can’t answer but I am very intrigued to find out.

SCDW Driverless cars – Who will be to blame?